For the key dates and deadlines of Heidelberg University (e.g. lecture periods and deadlines for applications for places on degree programmes), please click →here.

The dates for the courses and examinations at the International Study Centre are available on the respective →course or →examination pages.

Please check our →homepage for current information on the coronavirus. 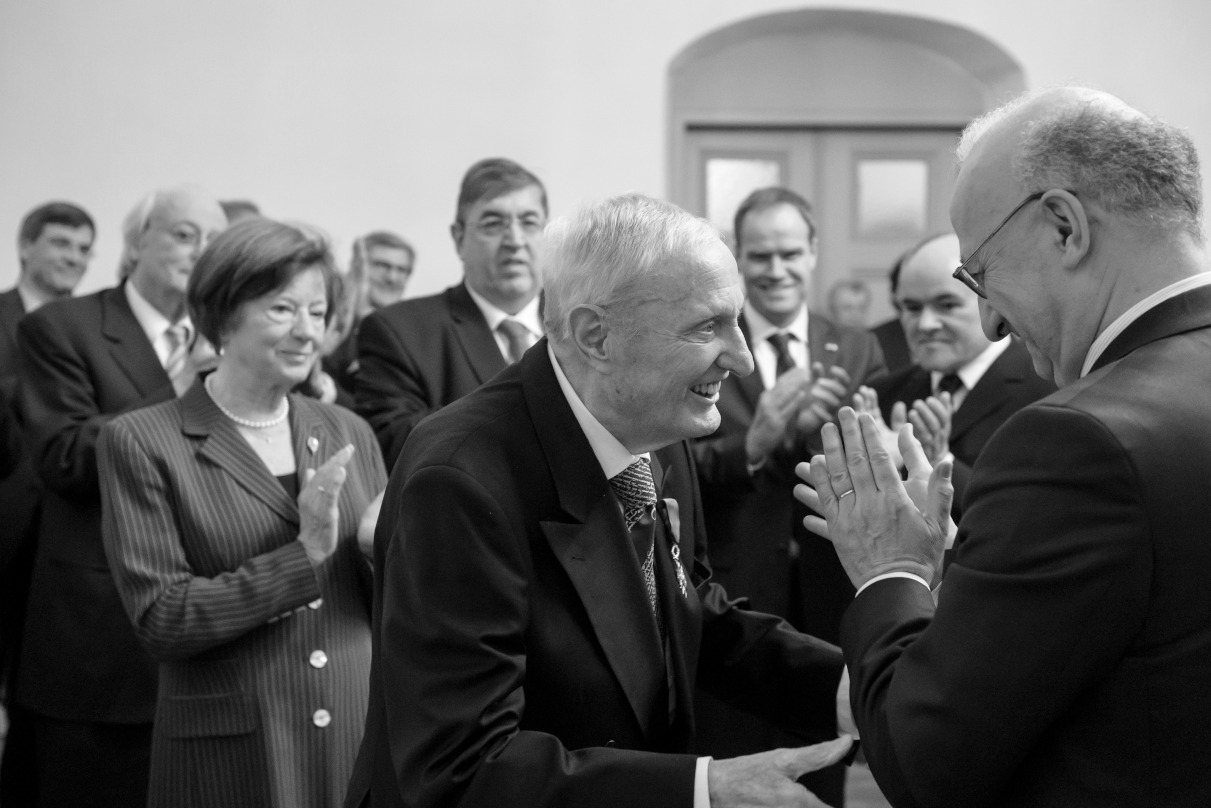 Professor Raff headed the Studienkolleg of Heidelberg University as its director until 1990. Aiming to optimize the preparation of international students at Heidelberg University, he conjoined the Studienkolleg and the Kolleg für deutsche Sprache und Kultur, which he had just founded. Thus, he established the International Study Centre (ISZ) and served as its director until his retirement in 1998.

His work at the ISZ was always motivated by his endeavour to prepare international students as comprehensively as possible for their studies, both in terms of the German language and their individual subjects, so they would have the best chances of succeeding at German universities. As he used to say, they were supposed to become “friends of our country” and return to their homes in this very manner, where they would be using and passing on what they had learnt and experienced in Germany.

From his early student days, Diether Raff had been enthusiastic about the idea of exchange between different countries. Consequently, in 1954-55 he was among the first Heidelberg students to study in Montpellier. As early as 1957 – long before the Élysée Treaty of 1963, establishing friendly relations between Germany and France – they issued a charter of friendship. His interest in foreign cultures and enthusiasm for the understanding among people from different countries and cultural environments were central to his character and accompanied him throughout his life. While working at the Studienkolleg, where in 1963 he began teaching history to international students, he took over guest professorships in various countries: via the Fulbright Program in St Louis and at the University of California in Irvine, at the Foreign Studies University in Beijing, and at the University Paul-Valéry in Montpellier.

Those visits and the encounters with people from abroad, which he cherished highly, prompted him – simultaneously to his occupation at the Studienkolleg and, later, the International Study Centre – to champion the internationalization of Heidelberg University: From 1974 to 1995, he was the executive chairman of the senate committee on international matters. From 1979 to 2000 and from 2005 to 2012, he was the representative for the university’s partnerships with the Montpellier Universities and from 1983 to 1998 for the partnership with the Foreign Studies University in Beijing. From 1992 to 2007, he was the German representative of the Advanced Placement Program of the College Board New York. Moreover, from 1996 to 1999, he held the office of the representative of the Baden-Württemberg Ministry of Science, Research and Arts for the cooperation with the Universiti Institut Teknologi Mara in Shah Alam, Malaysia.

Among all the projects in Germany and abroad that he promoted so passionately, it was the partnership between Germany and France which was particularly dear to his heart and to which he committed himself way beyond his retirement. He championed the foundation of the Heidelberg House in Montpellier and the Montpellier House in Heidelberg. For many years he presided over the supporting association of the Heidelberg House in Montpellier; he became its honorary president in 2013.

Due to his merits for this Franco-German partnership, Professor Raff was awarded various honours: In 1988 he became Chevalier, in 1995 Officier dans l’ordre de Palmes académiques; in 1991 he was awarded the German Cross of Merit, followed by the University Medal of Heidelberg University. In 2005 the City of Montpellier bestowed honorary citizenship on him and Heidelberg University made him an honorary senator. In 2013 the City of Heidelberg awarded him its Medal of Honour. In 2015 he was appointed Chevalier dans l’ordre national du Mérite of the French Republic, and in 2019 he received the Order of Merit of Baden‑Württemberg. In his speech on the occasion of the bestowal, Minister-President Winfried Kretschmann acknowledged Professor Raff’s role in forming the partnership with France, and he mentioned that for Professor Raff, as a historian, it was evident that history is also made when people meet.

And indeed, it was people meeting, especially people from different countries and cultural environments, that fascinated him his entire life. Bringing people together and jointly working with them towards better relations between each other, this meant to him both an elixir of life and an obligation. He loved the interaction with international visitors at Heidelberg University, who he received, quite naturally, very often as guests under his roof – his institute’s and his home’s alike. He always took care of things personally, not just the big issues but also the many details, always acting on the maxim “Those who are too big for what is small are too small for what is big”.

No matter to what task he devoted himself, he used to do it with all his vivacity and driven by a very personal interest in the issues of those involved. With the same dedication and personal commitment that he contributed to the promotion of the partnership projects, he took care of “his students” and his staff, whose advancement was a key interest of his. He administered to their needs, dealt not only with curricula, examination regulations, job descriptions, etc., but also with the very personal matters of those for whom he felt responsible. For instance, he made sure that students who had not found a room yet would be provided with accommodation, he negotiated a “free table” at the canteen if students were struggling to make ends meet, or he showed them the way out of a predicament. Wasting too much time on problems was not his cup of tea, however; he rather focused on arriving at swift and, if necessary, unconventional solutions. Administrative hurdles and objections by less committed colleagues never prevented him from doing what seemed to him humanely necessary.

Right up to his last day, Professor Diether Raff took an interest in “his institute”, the International Study Centre, whose success always remained dear to his heart.

This poem was written after two weeks of German instruction. 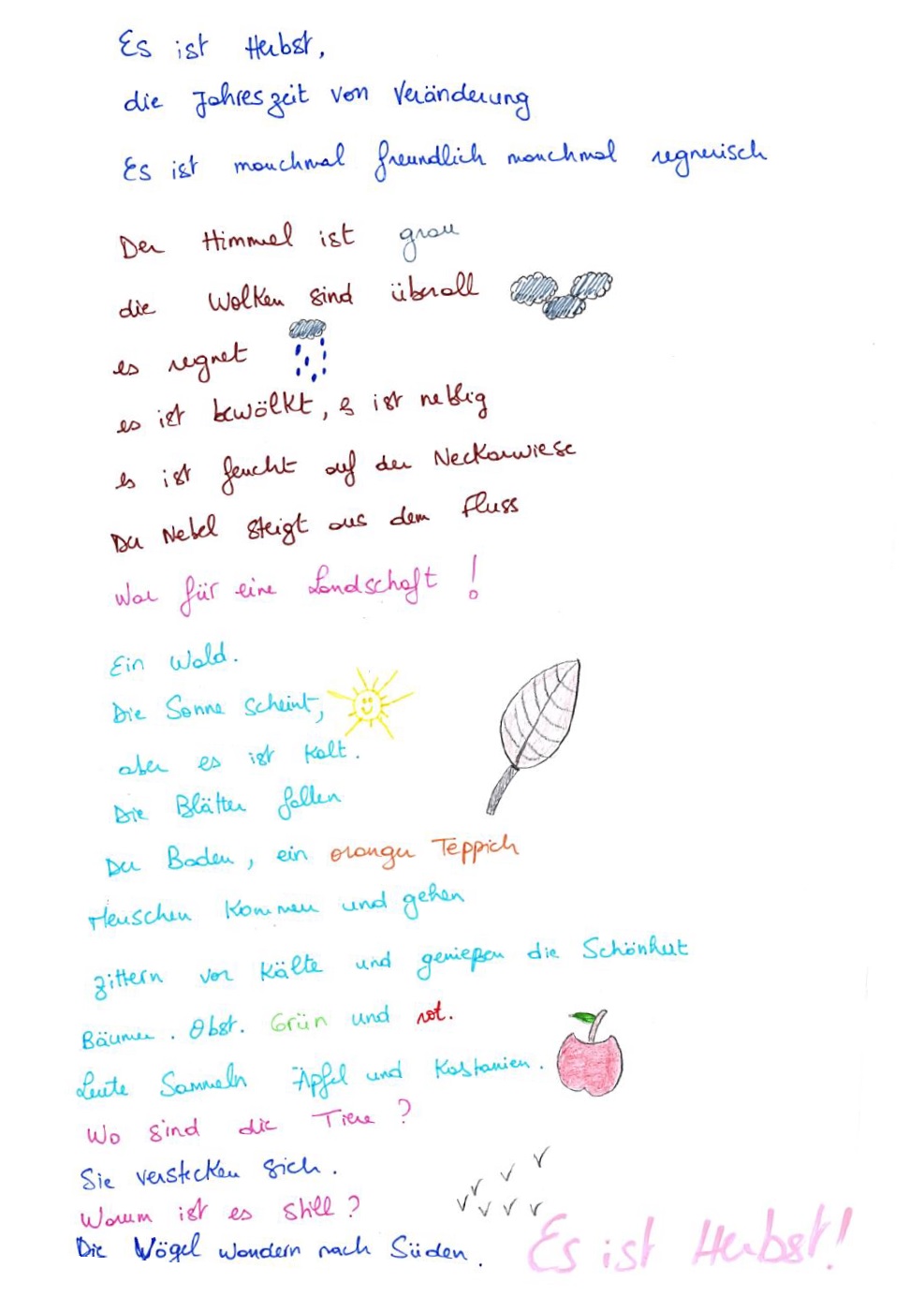